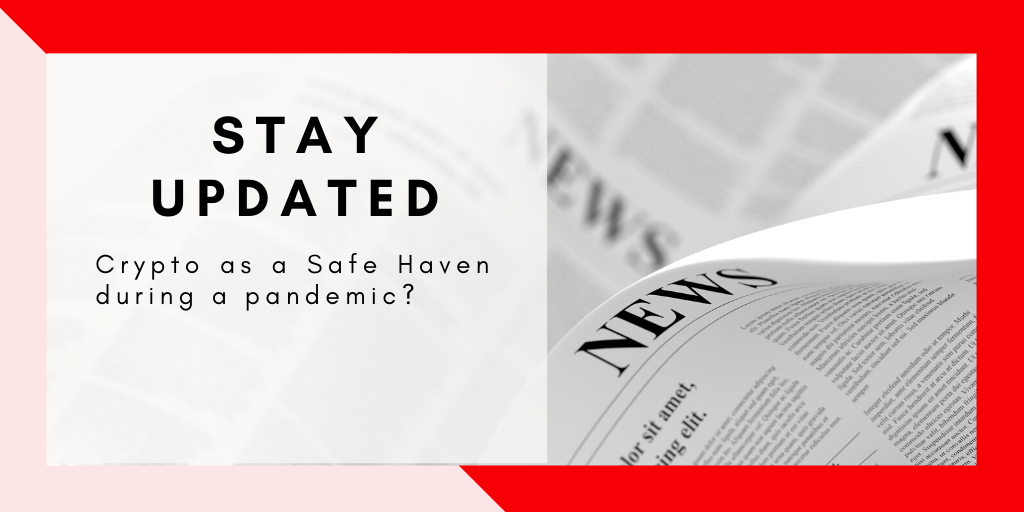 Crypto as a Safe Haven during a pandemic?

Crypto as a Safe Haven during a pandemic?

Covid-19 is not only affecting the liquidity of SME’s and day-to-day business, but it also affects the broader economic system and the financial markets. The best indicator of this is the extreme volatility in the stock and oil market. In turbulent times like these, people often resort to investments they consider to be “Safe Havens” (investments expected to retain or increase value during market turbulences), traditionally gold, to replace more volatile assets. Throughout history, gold has served during several crises as a refuge for unsettled investors (see chart). And although the price of Gold also crashed to a certain degree during the 2008 Financial Crisis and the current Covid-19 crisis, this was due to investors desperately needing liquidity and selling dispensable assets, and didn’t affect the function of gold as a Safe Haven.

Another Safe Haven is the Swiss Franc, mostly due to the high political and economic stability of Switzerland, and the predictable monetary policy of the Swiss National Bank. With the progressing digitalization and the rise of cryptocurrencies, a lot of people thought that Bitcoin or other cryptos had the potential to replace traditional Safe Havens. Even the Swiss National Bank is currently considering launching a digital Franc, although only for the interbank market in a first step.

Interesting in this context are especially so-called Stable Coins. They are a new class of cryptocurrencies that attempt to offer price stability. They are fully or predominantly backed by reserve assets, mostly fiat money or gold. They are an attempt to combine the best of both worlds – the fast processing and the security and privacy of payments with crypto, and the volatility-free, stable valuations of (certain) fiat currencies. Facebooks project LIBRA was all about launching a stable coin.

The most prominent Stable Coin based on Swiss Francs is the Crypto Franc (XCHF) by Bitcoin Suisse. In the case of the Crypto Franc, it is backed by real currency deposited in a safe, and not only book money. Therefore, the Crypto Franc in theory has all the advantages of the real Franc, profiting from its reputation and stability. Additionally, it has lower transactional and storage costs due to the distributed ledger it is based on. The only costs occur when depositing or withdrawing money to or from the safe (currently 0.2%). The Tokens can be stored in a customary wallet. There are also several Stable coins on the market backed by gold.

What are, beside the aforementioned, the advantages of cryptocurrencies in the time of a crisis, e.g. a pandemic like the current one? The first one is of epidemiological nature: The use of cryptocurrencies will accelerate the replacement of physical money, which currently plays a role in the transmission of the disease. Secondly, cryptos can make traditional Safe Havens more and easier tradable. A stable coin backed by gold can be transferred instantaneously across the globe, whereas gold itself cannot. Thirdly, the current policy of the central banks with de facto monetary financing and quantitative easing could easily trigger more unsettlement among investors and negatively affect the bond and stock market, or even lead to inflation. A gold-backed stable coin would in theory stay unaffected by such measures.

This is also backed by observations during the current crisis. The crypto market as a whole was not spared by the crisis. Bitcoin, the benchmark crypto, fell dramatically by 44% on March 13. The crypto market seems to correlate with the stock indices and the general economic situation. According to CoinMarketCap, a renown website tracking cryptocurrency, the world top ten crypto’s fell all by more than 30% during this crisis, with one exception: Tether (USDT), the only Stable Coin among the top ten. This is also the case with other stable coins like Paxos Gold (PAXG) and Tether Gold (XAUT). Although the price dropped momentarily during the crisis, the price for both increased more than 10% compared to before the crisis. The current demand is very high, which seems to confirm the potential of stable coins as Safe Havens.