The last 18 months has seen a diffusion of FinTech away from the core hubs in London and California. More countries and cities are vying for the opportunity to build up and further develop eco-systems that foster and promote FinTech. 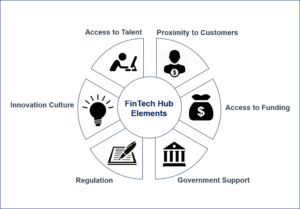 Europe and Asia Pacific are currently witnessing the greatest increase in ‘new hubs’. Moreover, we are also seeing cities in the US (e.g. Chicago) and Latin America (e.g. Sao Paolo) taking an increasingly prominent position on the global FinTech stage. Today, peripheral ‘old hubs’ (e.g. Zurich, Copenhagen and Toronto) are consolidating their position and continue to make it easier for start-ups, especially FinTechs, to launch and grow.

What makes these cities attractive?

Access to talent and expertise, access to funding, proximity to customers, regulation, government support, and innovative cultures are a few of the key factors used to evaluate and promote FinTech hubs. Rated against these ‘KPIs’, each region has its own strengths and weaknesses. Let‘s look at previously mentioned Europe and Asia Pacific for two examples.

Broadly speaking, the access to expertise and talent in Europe is considered to be high. Furthermore, the increasing emergence of regulatory sandboxes and the desire to cooperate with regulatory bodies outside the region (e.g. Switzerland and Singapore) indicates that there is an effort to tackle the regulatory and bureaucratic challenges that have been key barriers to FinTech development. As the impact of Brexit still casts a shadow of uncertainty over London, the European FinTech capital, there is increasing attractiveness to other hubs on the continent.

Asia Pacific is an increasingly important player on the international FinTech scene with new hubs emerging in Shenzhen, Taipei, and Tokyo; positioning themselves alongside the regional ‘old hubs’ of Sydney, Singapore and Hong Kong. Regulatory benefits are becoming increasingly attractive with the Asia Pacific region accounting for just under half of global regulators committing to sandboxes. The area has also been the most active when it comes to cross-border regulatory cooperation. The Monetary Authority of Singapore has signed more cooperative regulatory agreements than any other body in the world; coming to arrangements with governments that include Switzerland and Abu Dhabi.

What does this mean for FinTech?

The diversification and globalization of FinTech hubs serves to further reinforce the speed with which financial services can respond to customer demands and increase the agility of back-office processes. As talent pool grows, so too does the expertise to create new business models from a wider set of use-cases. This expansion of human capital, driven in part by government incentives and support, and investment capacity are key to further strengthening the industry from the bottom-up.

What does this mean for Switzerland?

Proximity to customers and expertise are very important and with a continued move towards a B2B2C model, proximity to financial institutions is a key criterion for success. This leaves financial centres in an advantageous position as start-ups look to launch products and gain traction and banks look to support their innovation strategies through partnerships. With increasing government support in Switzerland in the form of a proposed regulatory sandbox and collaboration with Singapore, Zurich is positioned as a key European city in which a start-up and FinTech hub is quickly taking root.

As discussed in the previous article however, the formula for these bank and FinTech partnerships is far from perfect. My following post will look at how both banks and FinTech’s can work towards ensuring more successful and sustainable partnerships in the future.

Charles Burns is Business Developer and FinTech Scout for AlmavivA, the largest Italian systems integrator. He works with leading FinTech’s and Italian financial institutions, promoting partnerships and commercialization of new products and services. Prior to joining AlmavivA he spent four years in strategy consulting at KAE in London. He holds and MBA from Copenhagen Business School.