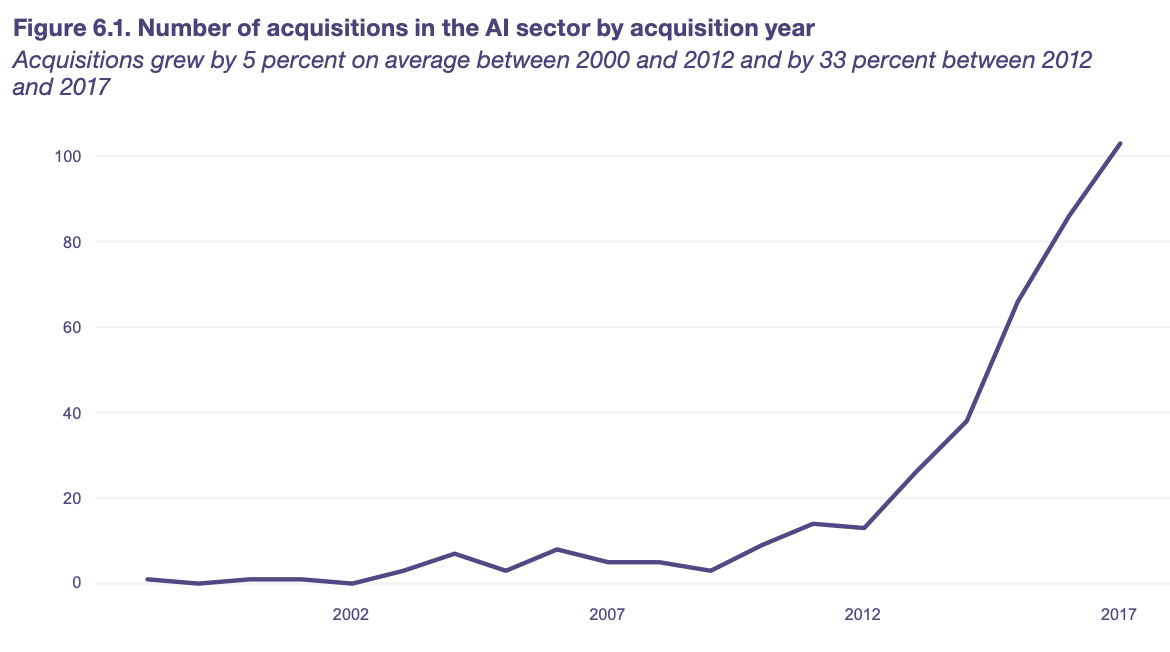 You may have noticed that there is a debate raging about the increasing power of the big tech firms. If not, where have you been? Google, for example, executes over 92% of all global search engine queries, while Amazon controls 41.5% of the global cloud computing market. Many fear that this near monopoly will mean competition is stifled. And it is not an issue unique to the consumer tech market. The artificial intelligence (AI) sector displays many of the same traits.

At the World Economic Forum this year, PwC AI specialist Anand Rao highlighted the issue of “data network effects” and the “inherent bias” favouring the big players. These companies have access to a huge amount of data meaning their machine learning algorithms have better training data to work with, which allows them to build even better products. This, in turn, attracts even more customers, more training data, and squeezes out smaller firms.

Cash-rich big tech firms have also embarked on a massive wave of AI acquisitions, which grew on average by 33% between 2012 and 2017, further concentrating greater power in fewer hands. Google, for instance, ranks 10th in terms of the number of new patents filed, but it comes first in terms of AI acquisitions, and Apple and Microsoft are not far behind.

In Switzerland, Apple has completed a number of high-profile AI acquisitions in recent years. In 2015, it acquired Faceshift, the Zurich-based facial-tracking startup that began life as a project at ETH Zurich. In 2019, it was reported that Apple had acquired Flashwell, which had been developing automatic image recognition technology. And earlier this year, Microsoft announced a USD 1 billion investment into Elon Musk’s OpenAI as well as a strategic collaboration and investment with Novartis and the ETH in Zurich.

But while this all sounds positive there may be downsides too. Pascal Kaufmann, co-founder of Swiss AI firm Starmind, commented, “When large US tech companies announce major investments in Swiss-based companies or even leading research institutions, Switzerland indeed benefits in the short-term. However, once the know-how is extracted, the IP transferred out of Switzerland, I think the downsides kick in. New products and technologies are developed elsewhere and will be sold back to us. It reminds me of the textile industry almost 200 years ago where Swiss pioneers went to India and brought back the know-how on how to dye textile. What followed was the automation of the process and the downfall of India’s textile industry. We should do our best to turn know-how into applications and companies.” So, is there any hope for the smaller Swiss players out there?

The answer to that question depends on how things develop from here, and who controls the underlying AI data: corporations, governments or individuals. If the datasets remain largely proprietary, a small number of tech giants in the US and China will continue to dominate and, ultimately, to monopolize the sector.

However, there is growing unease with the status quo, particularly in the EU and among US politicians like Elizabeth Warren. Given this, it is possible that governments and regulators could force tech companies to share data and build a degree of interoperability into their AI systems, variations of which are already being considered by the EU, the UK and Japan.

Finally, it may be that tech companies agree to give more control back to individual users and agree on a common data usage rulebook. By employing decentralised technologies like blockchain, individuals and companies could assert greater control over their data and how it is used. A company, for instance, could share its financial data with a bank for 30 minutes to apply for a loan. The bank’s AI algorithm would carry out a risk assessment and set an interest rate, and then the data would be deleted.

So, which way will it go? We don’t have a crystal ball, but it seems probable that there will be new regulatory developments in the not too distant future. And any moves towards more data sharing, interoperability or decentralisation will undoubtedly benefit startups and smaller players in the sector, helping to create a more vibrant and competitive AI ecosystem. Watch this space.

THE RELEVANCE HOUSE www.therelevancehouse.com is a full-service marketing consulting agency for firms in the blockchain and emerging technology sector. We don’t operate like a regular agency. Think of us more as an outsourced marketing department. We become part of the team. We focus on helping technology start-ups and projects to build and communicate a relevant brand and story. Why? Because only relevance has impact.