We had a pleasure to attend Money2020 in Copenhagen, the European edition of the world’s largest payments & financial services innovation event. The agenda for this 4 day fintech event was packed with talks, presentations and panel discussions.

Although it’s impossible to attend all sessions after a busy couple days we managed to pick out some nuggets of information that we found particularly interesting and we would like to share them here. s

Payment companies were well represented, from banks introducing new methods to new POS terminals. Alipay was the most impressive company that we saw. The CEO, Sabrina Peng, demonstrated how Alipay managed to make their app an essential part of Chinese consumers’ daily lives. Alipay has over 400 million users in China and announced that they will bring their service to Europe in order to service Chinese tourists. This company clearly operates at a different level compared to banks and payment companies in Europe.

Biometrics and ID was one of the hot topics, with companies demonstrating a wide range of applications from digital identity verification, KYC, payments to onboarding process optimisation. After speaking to many companies in this sector they seem to agree that biometric data will play a vital role in the future of customer verification. It isn’t likely to be used as a sole method of verification, but will certainly make the user experience of the identification process easier and more secure.

It was fascinating to see a number of banks and observe how they approach the event, some being incredibly defensive (e.g. HSBC – despite the most impressive stand at the event!) and others really open to embrace the new technology. I was particularly impressed with ING, Rabobank, BBVA – how closely they keep en eye on tech startups and innovation. Carlos Torres Vila the CEO of BBVA shared bank’s approach to tech startups and explained how they applied a hybrid solution, i.e. working with accelerators, acquiring startups, incubating their own ideas and investing via VCs. I thought that the culture represented, well at least the leadership team at the conference, really sets them apart from their competitors. 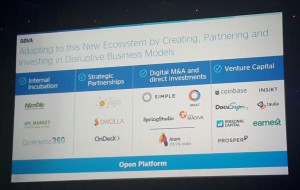 I was surprised to see so many corporate people in suits. After attending tech conferences, such as TechCrunch Disrupt, I was expecting to see more startup founders and techies. This meant that the majority of the discussions were fairly high level from the technology perspective. Still extremely relevant and most likely groundbreaking for those representing more conservative organisations!

Talking about the startups – I didn’t see enough of them at Money2020. Startup corner had maybe 15-20 companies – considering that there are hundreds of fintech startups in Europe this was a bit disappointing. The startup battle was won by james.finance that uses machiine learning to allow companies build better scoring models.

A corporate culture was a major topic of a few panel discussions – financial services providers have recognised that they need to adjust their culture in order to compete in the modern, tech-driven market, where CIOs do not have the monopoly for tech knowledge. Hopefully these talks have planted some seeds in the heads of finance companies and we’ll see even more innovation at the next Money2020.